04 Sep Two children won the opportunity to zip wire with the Red Devils!

Posted at 13:54h in Uncategorised by user_bmthpier 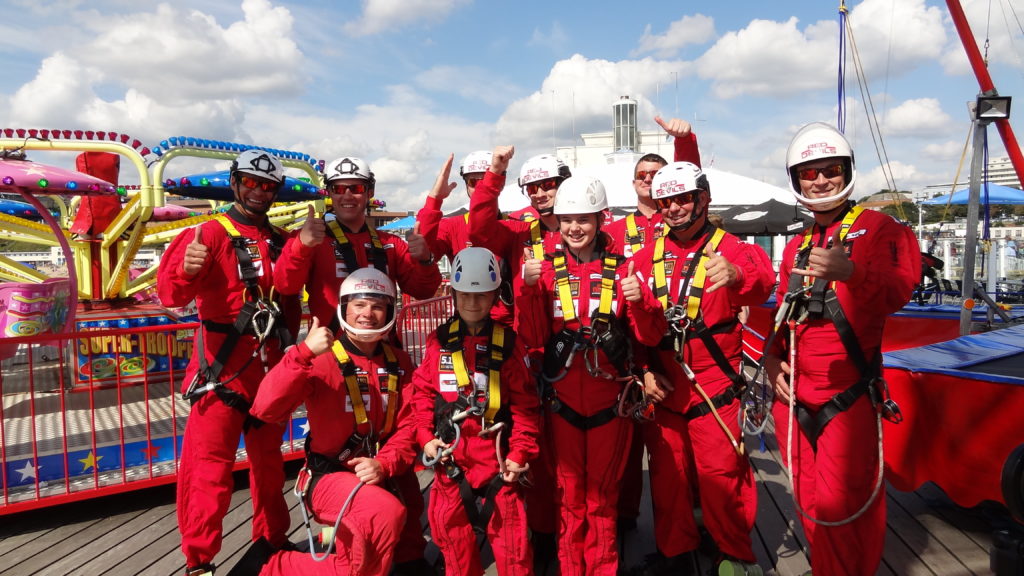 Two local school children won the opportunity to tandem zip wire with the Red Devils Freefall Display Team at the Bournemouth Air Festival!  The competition, run by RockReef appealed for the public to nominate youngsters for the unique experience.

Marketing Manager, Sarah Hunter on Bournemouth Pier said, “We were inundated with nominations for many children from across Dorset.  It was quite a task selecting our two winners but the ones we selected did stand out as very deserving winners.”

9 year old Jack Kent was nominated by his brother, Shane.  Shane wrote…’Jack was moved by the story of four year-old Jacob; a young boy with a severe case of Cerebral Palsy, in need of an emergency operation to prevent him from being wheelchair bound. Due to the fact that Jack is so compassionate, he decided to raise at least £500 towards the ‘Dorset Children’s Foundation’, a charity that is currently helping Jacob, and which is run by one of Jack’s great footballing legends Harry Redknapp. On Saturday 17th June, in boiling hot conditions, Jack dribbled his beloved football from Sandbanks to Bournemouth Pier and back (8 miles), in order to help poor Jacob get the care he needs to walk again. Amazingly, Jack has raised over £600!’

The competition’s second winner was 11 year old Tamara Andrews.  Tamara was nominated 3 times; by her father Martin, her uncle Christopher Andrews and family friend Janet Finn. Martin wrote, ‘I would love my daughter to win this.  She has had a difficult couple of years since losing her mum but keeps going and is becoming a wonderful young lady, gaining top honours from school and being so helpful and kind.’

Janet contributed, ‘Since losing her mother to breast cancer, she and her Dad Martin, have become the perfect partnership. With the love and support of the rest of her family and friends this beautiful, bright girl is full of confidence who is willing to take on any challenge.’

The Red Devils Freefall Display Team came out in force with 10 of them taking on the challenge of the zip wire.   Corporal Alex Perry advised, “It’s great to back in Bournemouth and sharing the zip wire with 2 fabulous, deserving winners.  It was good to hear their stories and hopefully they’ll come sky diving with us when they’re older.”

Tamara said, “I was really excited to hear that I’d won this prize. Dad hadn’t told me that he’d nominated me so it was a bit of a shock.  The zip wire was really, really good and it was brilliant meeting the Red Devils!”